In my recent Inflation post, I elaborated on my conclusion that, contrary to widespread (and my prior) opinion, inflation was likely to prove a fairly distant threat. Despite the smoke rising from the bloody printing presses… And despite the Fed since confirming their long-expected QE III – or should I say: QE Forever, QE Infinity, QE God Fucking Save Us… Take your pick! You know, the mind boggles – how/why on earth does the Fed confidently expect Agency MBS purchases to smoothly flow through into improved labour conditions?!

No real need to revisit my post, just read Howard Marks’ latest instead, which came out a few days later. In his memo, he covers much of the same ground – probably in a far better & more relentless manner… [And apologies if I ramble on: Remember, with this series, my intention isn’t to necessarily write about specific stocks here, old or new. Rather it’s to give you some deeper insight into the thoughts, logic and pros & cons underlying each of my allocations].

Anyway, this conclusion arrested my total real asset allocation at 18% – no need to rush here, folks – and I’d consider my true underlying exposure to be actually lower. This compares to my original target of 20-25%, or even more. In my last Century post, I highlighted another conclusion: My belief that the correct ranking, in terms of scale & timing, for inflation plays is: i) Property, then ii) Natural Resources, and then iii) Agri. I didn’t get that right either – but as you’ll note reading on, I’m not convinced that will persuade me to change my own preferences:

I don’t know about you, but this is my least favourite real asset category, and v often an empty bucket for me! I really envy investors years back, this definitely used to be a wonderful sector to be mined & exploited. 😉 Maybe I’m missing something, but these days I just don’t see it… Let’s think about the majors, beginning with gold & silver – these 3 charts are v instructive: 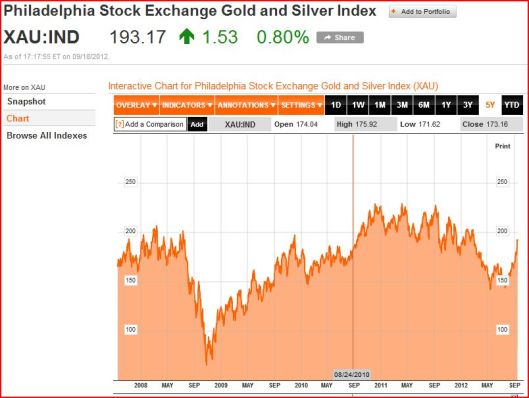 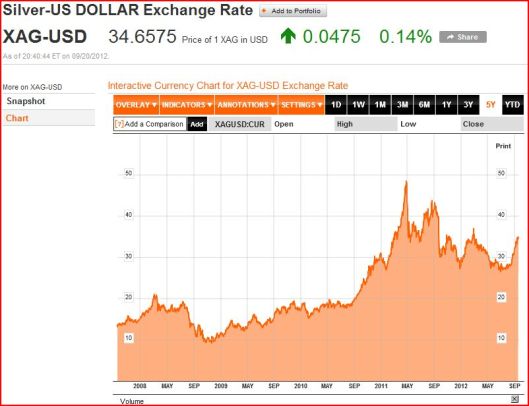 Well, I really don’t need to explain these, do I..?! And this type of thing’s all too common in the whole natural resources sector. Let’s say you sat down 5 years back, or even much longer, and decided gold & silver were rallying big-time. Well, congrats! And buying a selection of the major gold & silver miners would have seemed like a great way to exploit that view, eh? But it would have proved to be a complete dud… Aah, but surely that means the miners are way cheap now? Maybe, but at current gold & silver prices does this really seem like the best time to begin making that particular bet?!

Next, we have the big boys – the likes of Rio Tinto (RIO:LN), BHP Billiton (BLT:LN) & Vale (VALE:US). Trouble is, these are really just a giant bet on the building blocks of the economy: Iron ore, copper & coal, for example. I must say, those really aren’t the kind of real assets I dream of… Time & again, their pricing has proved incredibly difficult to forecast – not surprising when you consider their intense vulnerability to economic fundamentals, and sentiment. Throw in their exposure to Chinese machinations, and the impact of long-term headwinds in the developed world…and you’re presented with a bet that may be just too difficult & too risky to make.

The oil majors are probably the best of the bunch. My heart skips a beat every time I come across a comparative table of their P/Es. I just want to jump up & buy, BP (BP/:LN), Statoil (STL:NO) and Total (FP:FP), for example (you gotta love that last ticker – hey, we’re Total, we are the bloody French market!). But they’ve been just as bloody cheap for years now..! And their difficulties with reserve replacement, plus their focus on dividends & financial engineering, doesn’t inspire me so much. Not to mention that other familiar problem – far too much correlation with the stock market, and far too little with the oil price! I’m reasonably confident the sector will enjoy a re-rating, but not so hopeful on underlying intrinsic value growth. For me, that usually means there are better things to buy…

That leaves us with the junior resource stocks: Jesus, what a fucking cesspool..! This is where the hucksters & the dreamers live. I really can’t decide who’s greedier – the promoters, or the investors? On the other hand, it’s pretty easy to spot who’s smarter & richer… The sheer gullibility & idiocy of some people (too many!) means there’s (almost) always investor appetite for these stocks. This, of course, forces one to wade through hundreds of garbage companies & over-inflated share prices if you hope to ever come across a possible gem. And screening offers precious little assistance in this dirty little corner of the market.

Nor does fundamental analysis – it only takes a bare minimum of intelligence, or analytical skill, to understand that the vast majority of these stocks will ultimately become worthless, or slide into the world of the living dead. Not to say I recommend you short these turds instead (if that were even possible, in many instances). Because there’s always a chance, on their journey to oblivion, that they’ll bubble higher & longer than you might ever expect. After all, you can’t analyze irrationality, and you certainly can’t analyze stupidity…

But there’s always some tiny silver lining. Very occasionally, you’ll find a stock with significant proved up/producing reserves/resources that’s priced at a substantial discount to intrinsic value. [Oh Lord, that statement’s surely gonna tempt the lunatics – please note, I’m most definitely not pointing you to companies/shares with zero production, zero proved & probable reserves, and no available CPR!] These opportunities usually arise from some terrible apostasy. Remember, junior resource investors can be just as rabid on the downside... Especially if their fear & greed are, shall we say, enhanced with T+20 delayed settlements & margin 😉 But even with these occasional gems, things can prove pretty tough. To illustrate:

Take Petroneft Resources (PTR:LN): The intrinsic value of their proved & probable oil reserves is obviously a multiple of the company’s current market capitalization. Admittedly, these reserves are located in Russia, which represents an unquantifiable risk. But I consider this offset by the opportunity presented by their much larger possible/prospective resources – also unquantifiable, of course. But investor sentiment has turned, and the prospect of necessary & near-term cash-raising is feared, so now it seems like no share price is too low for investors to sell. [A little bizarre to single out PTR for  this – aren’t most junior resource stocks always on the verge of another cash-raise?!] As I’ve mentioned before (in relation to agri-stocks, for example): When a company has negative cash-flows, and scarce cash on hand (or even worse, has debt outstanding), intrinsic value can remain irrelevant for a v long time.

Richland Resources (RLD:LN) is another holding I’ve written about (and I’ve one other undisclosed, but similar, holding). It’s a rather unique play on tanzanite – a precious gemstone that appears to be incredibly limited in terms of the scale & geography of remaining world resources. No cash issues here, but recent patchy news flow have still slammed the share price. I’m not sure I see anything here that dramatically changes the company’s long-term intrinsic value, but the recent price decline really illustrates how sentiment can have so much more impact in this sector.

This is all pretty instructive!

Junior resource stocks do not a portfolio make..! Sure, if you can wade through/ignore the dross and actually find a gem or two, buy a little. But I really mean a little – even just a 1% portfolio stake is perfectly adequate for each holding in perhaps a couple of different companies. And even at that size, I hate losses..!