Insurance companies are intriguing! Maybe it’s my inner value investor, but I suspect it’s really the mathematician in me… They’re like giant Rube Goldberg contraptions – it’s fascinating to contemplate the interaction & logic that dictates the inner workings of the machine. Trouble is, you’re never quite sure it won’t blow up in your face! Investment portfolios can be full of land mines, and debt can fatally exacerbate risk. Underwriting risk may present the most dangerous risk. A company can write far too much insurance, at far too low a price, and nobody might be any the wiser for years to come…

The first line of defence is industry & government regulation. As I highlighted here, the regulators have generally done a better job (than, for example, bank regulators!). But good investors need to be self-reliant – S&P and Moody’s reminded us of that! Your choice of company can lower risk substantially. Focus on those with i) low(er) risk/plain vanilla investment portfolios, ii) low/zero levels of debt, iii) consistent & profitable underwriting records, and iv) less exposure to tail risk & the tyranny of discount rates (go for property & casualty (P&C) insurers, not life or re-insurers!). Of course, lower risk might just equate with boring – we’d like something more exceptional…

At this point (um, damn title!), you’d probably have expected me to home in on an insurance company CEO and/or CIO who’s an exceptional investor: Berkshire Hathaway (BRK/A:US), Fairfax Financial (FFH:CN), and Greenlight Capital Re (GLRE:US) are classic examples, and all look attractive from a value perspective. But there’s a much less flashy/newsworthy way to run an insurance company: Exceptional underwriting.

Which is exactly what FBD Holdings (FBD:ID, FBH:LN) delivers, while offering a longer & arguably better track record than those feted companies.

Let’s begin with a proper introduction:  FBD was founded in the ’60s by a group of Irish farmers, and is now one of Ireland’s largest P&C insurers, with a loyal client base of farmers, individuals & small business owners. It’s the only Irish owned company left in the sector, since Liberty Mutual bought control of Quinn Insurance. The company experienced a changing of the guard in 2008, with Andrew Langford appointed CEO (now a 16 yr company veteran, despite the youthful appearance) & Cathal O’Caoimh as Group Finance Director. Director’s annual comp. is EUR 2.1 mio, which appears to be less than the value of their share/option holdings (and the CEO’s been buying shares). The original/founding company, Farmer Business Developments plc, is a long term/core shareholder with a 25.5% stake in FBD’s ordinary shares. Outstanding shares total 33.4 mio (ignore 13.2 mio of ‘A‘ ordinary shares, they’re non-voting & have no capital or profit participation rights), for a pretty decent market cap of EUR 344 mio ($446 mio).

OK, we may as well tackle the PIIGS in the room immediately: Yes, I’m taking about an Irish company, and it only operates in Ireland! Even Irish investors might feel a little queasy now – if you’re a non-Irish investor, you’re probably fit to throw up & move on! But please, keep reading (you’re in good company, Fidelity recently declared a 4.0% stake). But I believe Ireland is a great long-term buy:

– Ireland’s increased debt burden’s mainly due to a colossal political blunder (bailout of banks & their creditors), not the profligacy of its citizens

– Despite the uncalled for debt burden, the Irish people are already tackling the hard slog back to competitiveness & fiscal stability (unlike Greece)

– We’re now in a fifth year of economic contraction – how much worse do you think it can get?!

– In similar vein, this post may be well-worth a read

So, how does one buy into the Irish market? The obvious answer’s a fund: I covered them during The Great Irish Share Valuation Project – 2 ETFs, and the New Ireland Fund (IRL:US) which sports a 13% NAV discount. But their top holdings aren’t necessarily that Irish in their exposure…or cheap! And 11-22% stakes in CRH (CRH:ID) looks like a pricey bet to me right now. The alternative (beloved of emerging market managers) is to buy domestically focused banks. Yes, they offer comprehensive economic exposure, but…I just don’t buy banks, and Irish banks won’t persuade me otherwise! However, insurance companies also offer the same exposure to every economic nook & cranny, minus the obscene leverage! Yes:

But is it safe? Well, let’s take Charlie Munger‘s advice & ‘invert, always invert!‘. Picture we’re back in 2007, and I present you with the following facts & charts about the next 5 years:

[Note: All charts from FBD’s latest presentation – check it out, plus audio] 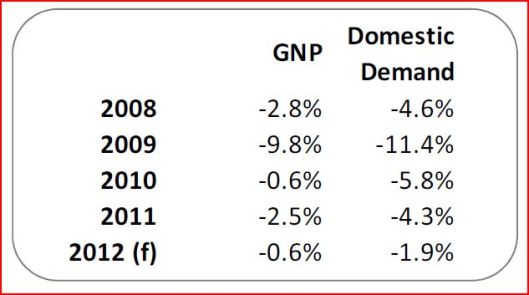 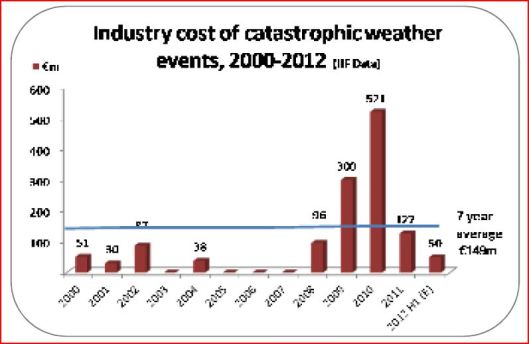 – All Irish insurance companies will face a significant decline in premium income: 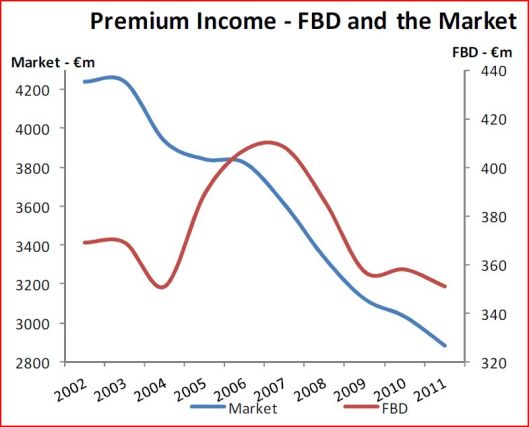 – All companies must compete with Quinn Insurance, who’s clearly mis-pricing underwriting & investment risk (in a mere 4 years, it doubled market share & vaulted from No. 7 to No. 2 in the market!)

– FBD has 39% of investment assets in Corp. Equities & Bonds/Loans/Property, and will face 3 FYs of investment write-downs, restructuring & net losses

Now, bearing all that in mind, what’s your prediction of how FBD would end up 5 yrs later in 2012? Does it look anything like this..?

– Has continued with a decade of market share increases

Yep, I thought not..! Don’t worry, I’m sure I wouldn’t have predicted it either. If the company can deliver superb defensive play like that, in the face of an economic meltdown, the future should hold no qualms for any FBD investor. The explanation lies in their underwriting record.

[We may need some context: If I recall, the global industry generally averages ’round a Combined Operating Ratio (COR) of 100-102%. Yes, it actually breaks even/makes losses on its core underwriting business! It only turns a profit if investment earnings on its ‘float‘ exceed the (cheap) 0-2% cost of the related claim liabilities (presuming that 100-102% COR). Of course, any fan of Buffett already knows this (btw, don’t worry, we’ll be ignoring more exotic ratios – if you’re happy with a company’s balance sheet, long term underwriting record & valuation, you’re pretty much done!). The delight over cheap float obscures another key advantage: Leverage. The spread (investment earnings vs. float cost) is v positively impacted by the inherent leverage of an insurance company.

For example, FBD’s total equity of EUR 225 mio currently supports EUR 824 mio of investments. OK…don’t panic! This leverage is pretty normal – a natural result of the insurance business written & supported by the equity, and the normal cycle between premium payment & claim settlement. Also, v important, it’s not callable leverage. But it can still really impact equity if investment losses are incurred. Which explains the usual insurance portfolio bias towards (safe) deposits & bonds. It also means current yields are really starting to hurt… With financial repression promised for the foreseeable future, the industry’s increasingly being pushed into a multi-year cycle of hardening insurance pricing.]

And here is FBD’s record: 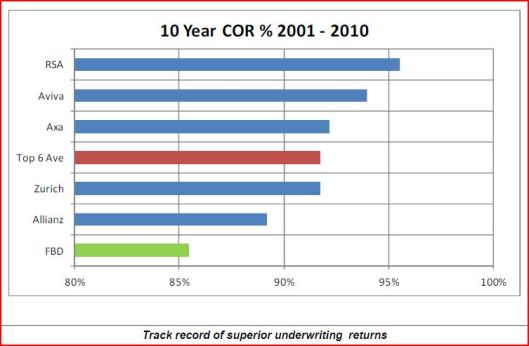 COR blimey, mate! FBD has sustained an avg. COR of less than 86%, over a decade. This is also confirmed by a history of positive runoffs for a decade now. This arms the company with an exceptional advantage. Think it’s a fluke? Here’s another perspective, Return on Equity, that’s even more impressive. 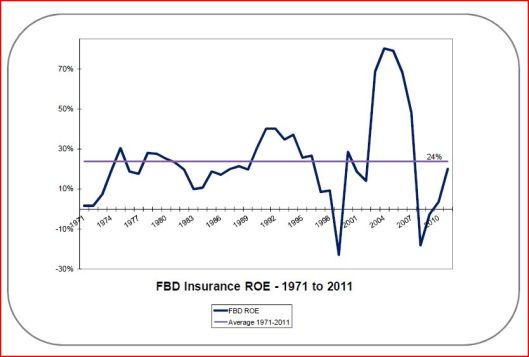 Yes, that’s correct – an average 24% RoE over 4 decades! And now FBD’s added a fortress balance sheet to its list of attractions: 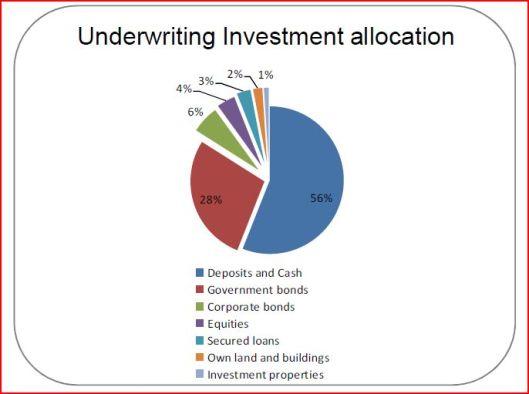 This balance sheet de-risking was basically completed with the spin-off of most of FBD’s remaining property/leisure assets into a JV, and the elimination of all debt, in Aug-2011. The majority of the bond portfolio’s in German bunds, the balance in short-dated Irish Treasury Bills (no longer dated Irish bonds), and duration’s kept pretty short. Deposits are spread over an approved selection of large/highly rated US, UK & European (non-PIGS) banks. Irish exposure’s restricted to the largest banks & is government guaranteed – any ending of this guarantee would likely prompt a re-allocation to other approved banks. With the recent disposal of a secured loan (for a 4.4 mio gain), 92% of FBD’s investment portfolio is now in deposits, government bonds & investment grade corporate bonds.

The de-risking was also the catalyst I needed to begin building my stake. More fool me for not starting larger, but I find that progressively building a stake on (good) news-flow, further analysis & technicals is a more prudent strategy these days. My conviction that restructuring/impairment charges were now coming to an end was also v encouraging. I’ve written (briefly) about FBD before (it’s in my Baker’s Dozen for 2012), but never got ’round to a full-blown writeup. With the strong share price rally YTD, it’s fair to ask if FBD is still a good buy? But isn’t that always the question with a growth stock..?! Good Lord, did I just say that? Don’t worry, I haven’t drifted v far – we’re talking GARP here. 😉

We can also estimate FBD’s NAV as of end-Nov:

What’s perhaps more exciting though is the likely compounding after the current valuation gap‘s potentially closed. FBD’s long term RoE, and current 12.2% market share, certainly suggests no barrier to growth. In fact, it’s created a broader/multi-channel distribution in the past few years via: a) more sales offices targeting its core farming/rural client base, b) FBD.ie & nononsense.ie which particularly target urban customers, and c) a rapidly expanding broker network targeting business owners. Combine that with a fortress balance sheet, a low average COR, predictable investment earnings, and a high RoE – they have the perfect formula to relentlessly grind down competitors & grind out shareholder returns.

If we i) presume a more conservative 15% RoE compounding, and ii) assume FBD ends up on a 2.0 P/B rating (based on reversion towards their current RoE target of 18%), we could see the shares (ignoring dividends) easily reach EUR 28.96 in 5 yrs time – a secondary Upside Potential of 181%.

I’m not making that a formal second/fair value target – only a fool anticipates 5 yrs of future growth! But it gives you some idea of the significant/ultimate potential I can see for FBD, even though it’s a stock that lets me sleep soundly at night. Note that type of return is based on tax-exempt dividend reinvestment. Taxes on dividends would reduce returns somewhat, which highlights the superiority of share buybacks.

FBD has a decent 3.4% dividend yield, with ample 4 times coverage – the ultimate intention is to perhaps double that payout. But as long as FBD trades below intrinsic value, a regular share buyback (vs. an increased dividend) offers a more tax-efficient return. It would also enhance shareholder value – this may seem counter-intuitive as a buyback (at a premium to NAV) actually reduces NAV. However, it’s easy to calculate it would produce an increased EPS & RoE, which should equate to a higher intrinsic value per share. Some measured reduction in investment assets to fund larger/more opportunistic share buybacks would also be an attractive use of capital.

FBD actually trades v technically. Recent support/resistance levels include EUR 8.05, EUR 8.50-60 & EUR 9.20-25. My latest purchase was about a week ago, right down at that EUR 9.25 support, as the share retraced…in the wake of Hurricane Sandy?! Frankly, I expected to see a longer period of consolidation in the 9.00s, but we now appear to have definitively broken EUR 9.60-90. This technically offers potential for FBD to now begin setting new 4 yr highs. It also appears to present clear blue sky for the share to target EUR 12.50, or even EUR 15.75, in due course. FBD’s now a 5.8% portfolio stake for me, a Top 5 holding.