It’s six months now since I did a write-up on KWG Kommunale Wohnen AG (BIW:GR) (the ultimate post in a 5-part series). Actually, a recap’s in order here & probably the best introduction for this post:

Part I & II:   German residential property has been (recently) described as:

‘Perhaps one of the safest & most attractive asset classes in Europe, or even the world‘.

– Demographics:   German population growth is broadly neutral, but is experiencing pronounced trends in favour of urban migration, smaller households & increasing floor size per capita. Investor horizons are often limited when it comes to property – they’d do well to note Germany has the largest population in Europe, the 16th largest in the world & Berlin is the EU’s 2nd largest city with 3.5 million inhabitants!

– Supply & Demand:   Annual housing demand’s around 250-350 K pa, well ahead of housing completions which are now accelerating but only recently bottomed out at 175 K pa in 2009-10. Germany’s second-hand property also trades at a major discount – e.g. in Berlin, existing housing stock can be purchased at a 30%+ discount to new building costs.

– Home Ownership:   German home ownership is a lowly 46%, in stark contrast to the usual Western market rate of 60-65%+. This reflects the government’s long history of housing provision & rent subsidies/suppression, but in recent years authorities have increasingly opted for privatisation. Couple this with rising prices & rents, plus the desire for a safer long-term investment alternative (vs. equity/bond markets) – I think we can be confident of a slow & steady convergence towards Western home-ownership levels.

– Economy:   Germany’s by far the largest & strongest (major) economy in Europe. It’s one of the few countries with a primary budget surplus & their Debt/GDP ratio is a manageable 81.6%. Inflation’s at 1.9%, the best in Europe (well, except for Greece..!?). Finally, Germany’s got one of Europe’s lowest unemployment rates, at 5.4%, and is also one of the few with an improved rate yoy. This all offers an attractive macro backdrop – aside from its absolute merits, it seems obvious Germany will also retain its relative economic & investment advantage vs. the rest of Europe.

– European Sovereign Debt Crisis:   The market’s mood has obviously lifted in the past six months, but Germany is still Europe’s safe haven. And many institutions (like pension funds) move with glacial speed, so I’m convinced we’ll see continued & increasing allocations into German bonds, property & equities for years to come. Germany’s also inescapably a part of the EU & Eurozone. With the Fed signaling no rate increases ’til 2014/15, and Europe way behind, this promises low interest rates from the ECB for the foreseeable future. Which appears to offer substantial support & further gains for European & German asset classes, inc. property.

Of course, that’s the best case scenario – if we re-consider the worst case, a major portion of capital invested in Europe obviously can’t/won’t just leave… It will simply get re-allocated back into safer/more attractive European investments & countries, like Germany & its property market.

– Yields:   Listed German residential property companies enjoy an average portfolio yield of 7.3%! On a bloody asset class that experienced no price wobbles, let alone price crash, in the past 5-7 yrs!? In a world obsessed with income, that kind of safety & yield should really grab investors’ attention. Rents also add to this potential upside – they’ve steadily risen (about 2% pa) in the past few years & have been accelerating more recently.

Of course, bond yields are just as important:  Companies now enjoy far cheaper funding costs as they re-finance, low Bund yields (1.39% on the 10 yr!) are an enormous positive influence on property valuations, and fixed income investors will be increasingly tempted into higher yielding (direct/indirect) property investments.

And this next chart (of European property valuations), seems to suggest Germany’s located somewhere in Eastern Europe..!? An average German price of just over EUR 3,000 per sqm looks wildly anomalous vs. the rest of W Europe. And a major portion of listed German portfolios have been sourced via wholesale purchases from municipal/housing authorities, so their portfolios are far cheaper – in fact, they’re valued at less than EUR 1,000 per sqm! 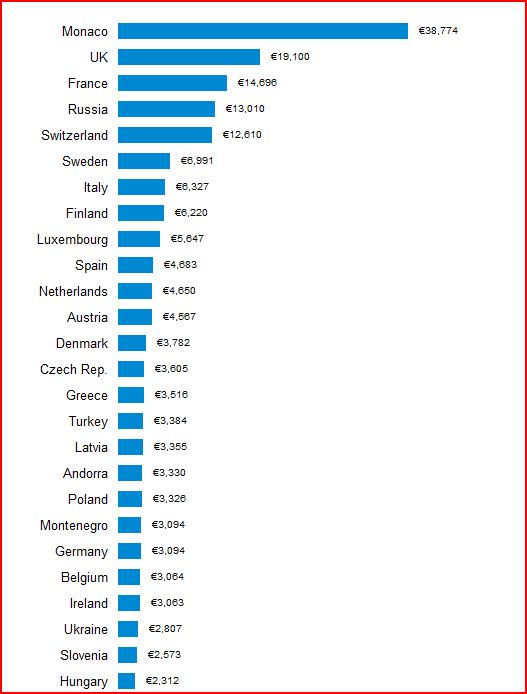 Markets tend to abhor such an arbitrage long-term – which promises a slow but relentless convergence – so I believe German residential property presents a compelling investment opportunity.

Part V:   My original KWG Kommunale Wohnen AG investment write-up. The shares were trading at EUR 5.152 at the time, and I tagged KWG with a EUR 9.51 Fair Value Target (plus a Secondary Price Target of EUR 13.41).

OK, so what’s happened since?!

Well, in the 5 weeks after my write-up KWG enjoyed a nice 15% rally to EUR 5.91. Then, on Dec 21st, KWG announced Conwert Immobilien Invest SE (CWI:AV) was taking a majority 60% stake – this was also (obviously) a sale of Karl Ehlerding’s stake. The share price spiked to a EUR 7.20 high on the news, and closed the day at EUR 6.28. Which, by some strange coincidence, equated precisely to a EUR 100 mio market cap…

[If you recall, I’d previously noted i) a marked sector correlation between market cap & price/book (P/B), and ii) a specific market cap which signaled a distinct step-up in terms of valuation: 100 mio+ market caps clustered ’round an average 1.02 P/B, a large premium to the avg. 0.59 P/B of sub-100 mio stocks].

Since then, KWG’s advanced another 11% to EUR 7.00, a cumulative 36% advance from November. But the company’s fundamentals (& technicals) have also improved significantly within the same period – let’s take a closer look:

This was no great surprise, though… The acquisition value of the Tower portfolio (in terms of price per sqm), and the value of their entire portfolio, were both at a significant discount to the sector average. Considering KWG’s (higher) portfolio yield, this valuation discount certainly didn’t appear warranted. I thought it v reasonable to assume this value gap would be eliminated in due course – either through progressive write-ups (as we saw at yr-end) & sales gains, or simply because investors would compensate by marking up KWG’s market cap (as I believe they’ve done with Grand City Properties (GYC:GR)). That was the motivation for the second price target in my original write-up.

The company’s leverage was also a pleasant surprise as of yr-end. When it comes to property companies, I prefer to calculate Net LTV for myself – it’s surprising how often I come up with a higher figure..!? In KWG’s case, I’m pleasantly surprised to arrive at a slighter lower ratio:

This compares favourably with a peer average of 57.0%. I’m also encouraged to see their average loan interest rate’s now below 4.0%, and they’ve no liability cliff(s) in terms of loan maturities. Property P&Ls I simply ignore, but I always check the cashflow statement just in case there’s a nasty surprise – but here we see marginally positive free cashflow of EUR 1.6 mio for 2012. This is quite normal for a property company with a 54% LTV & a primary focus on the continued development & growth of its portfolio.

Now, at this point, we may as well address the giant Sachertorte in the room… In March, Conwert increased its stake in KWG to 75.7%. [Stavros Efremidis, KWG’s CEO, also resigned in February to join Conwert’s Executive Board. Torsten Hoffmann now leads the company – he was formerly CFO since 2010]. So, is this a positive or negative development for the company? Well, if KWG was an AIM-listed company, I’d probably be off running & screaming in the opposite direction – that kind of stake on AIM seems to inevitably lead to coercive takeovers (at piss-poor prices), de-listings & other forms of minority shareholder abuse. But I think the situation here is quite different:

– Historically, it’s generally proved more difficult to squeeze out minorities in Germany, in terms of the legalities required and the existence of investors who will invest in & oppose such squeeze-outs

– Conwert trades at a 0.64 P/B despite the fact 95% of its portfolio is now located in Germany & Austria. Achieving a peer valuation for KWG in Germany would directly highlight the value & discount embedded in Conwert’s own portfolio

– To exploit, or prompt, that kind of valuation re-rating, a reversal of Conwert’s other German residential interests into KWG is quite likely, in my opinion

And think about the incentives for Conwert:  The company plans to focus on building up its German portfolio, eliminate its (unwarranted) NAV discount & avoid and/or respond to further shareholder activism (a la Petrus or Haselsteiner). The gains to be made from supporting/enhancing KWG’s operations & value appear far larger than those to be derived from oppressing/exploiting KWG’s minorities. At the v worst, I think there’s a risk KWG shareholders end up cashed out, or flipped into Conwert shares, with little reward in the way of a premium. As regards the latter alternative, I’ve already highlighted it as a potentially interesting investment.

KWG’s clearly joining the big league:  Its balance sheet is almost EUR 0.5 billion now, total equity amounts to 174 mio, and its current market cap is 111 mio. This is also obvious in its portfolio, which nearly doubled last year to almost 10,000 units (usable space now exceeds 600 K sqm) – with 54% located in North Rhine-Westphalia (Germany’s most populous state, where rents are rising 3% yoy) & another 11% in Berlin (where rents rose 8.1% in 2012). Its overall 13.3% vacancy rate masks a 1.6% rate in its Core portfolio, vs. 26.9% in its Investment portfolio (i.e. units acquired in 2012 & targeted for refurbishment etc.). Considering KWG’s success to date with acquisitions, the latter vacancy rate potentially offers v attractive value creation in the next year or two. It also seems v reasonable to expect continued progress, in line with KWG’s NAV history to date:

KWG also now enjoys the backdrop of a market which appears to be starting to enjoy a long-awaited boom – in stark contrast to the relatively frozen property markets elsewhere in Europe. German property transactions almost doubled in value last year, to EUR 11.3 bio – the best annual total since 2007. Not surprisingly, we’re also seeing this reflected in share prices – KWG’s peer group now trades at an average 1.00 P/B multiple (share prices have risen since last year, but so have NAVs).

Considering KWG’s current fundamentals, and its NAV history, I see absolutely no reason it can’t attain the same valuation as its peer group (within a reasonable medium-term time horizon). It now trades on a 0.64 P/B – a re-rating to a 1.00 P/B would imply a EUR 10.91 Fair Value per share, and a 56% Upside Potential.

But a second price target continues to make sense:  I estimate KWG’s portfolio was valued at approx. EUR 706 per sqm as of yr-end – which remains significantly below the peer average of EUR 850 per sqm (exc. Conwert, which enjoys much higher Austrian valuations). This doesn’t appear to be a case of comparing apples & oranges, though – KWG’s portfolio yield is that much higher also. Taking their latest rental run-rate forecast of EUR 30 mio, vs. a 425 mio portfolio & adjusting for their vacancy rate, I estimate actual portfolio yield is 8.15%. [And equates to rent of EUR 4.79 per sqm – which appears to make sense vs. reported Core rent of EUR 4.99 per sqm]. This compares to a peer average (inc. Conwert) of 7.28%.

Again, I believe it’s reasonable to assume KWG’s portfolio valuation will (eventually) converge with that of its peer group. I estimate such a convergence, on a yield basis, could result in a potential 29% uplift to equity. Which suggests a Secondary Price Target of EUR 14.06 Fair Value per share, for an eventual 101% Upside Potential.

Now, finally, let’s return briefly to the KWG chart. The share price spent the first 4 mths of this year in a consolidation pattern, filling the entire price gap created by the original Conwert stake announcement in December. This pattern was bounded by resistance at EUR 6.80-90, which was finally broken two weeks ago.

While I’d prefer to have seen a more explosive break-out, this was the final encouragement needed for me to increase my stake last week to a 7.0% portfolio holding (a Top 3 holding for me). Together with my 3.5% holding in Sirius Real Estate (SRE:LN), my total German property portfolio allocation has now reached 10.5%.