Since completing my usual valuation phase (as of end-May), I’ve added just one new stock write-up (NTR plc) & updated three stock valuations – Petroneft Resources (PTR:LN), Prime Active Capital (PACC:ID) & Fyffes (FFY:ID) – therefore, please be aware target prices in this post are now up to 11 months old. So while intrinsic valuations mostly tend to change quite gradually, pay close attention to any subsequent news & results (and possible valuation implications) – and, notably, to the potential impact(s) of the H2-2014 collapse in the Brent/WTI oil price. [Though let’s not overestimate this factor…I’m always amused by muppets who fondly entertain the notion a gyrating oil price is somehow relevant to the actual prospects of their favourite (but hopeless) junior resource stock!?]. And while we’re at it, I should also highlight our Irish stock universe is now down to 77 listings, after four H2-2014 market exits:

– Kentz Corp (KENZ:LN) was taken out by SNC-Lavalin Group. This acquisition was already locked down by the time the oil price started to slide (Petroceltic International wasn’t so lucky…), so this ultimately turned out to be a beautifully timed deal (and at a beautiful price & premium) for KENZ shareholders.

– TVC Holdings (TVCH:ID) distributed its stake in UTV Media (UTV:LN) to shareholders, and delisted shortly thereafter to continue its residual wind-down in private.

– REACT Energy (REAC:LN) has been suspended, pending clarification of the company’s financial (i.e. funding) position. That’s a shame – REAC’s yet another potentially good/great business undermined by insufficient funding. [I did see upside potential for REAC, in asset terms, but warned ‘Of course, the big problem here still is funding’]. This is a common hand-to-mouth complaint for many small(er) companies, but unacceptable when it comes to public companies – it seems an obvious fiduciary duty for management to scale (back) operating & capital expenditure plans, if necessary, to match the funding their company actually has available.

Of course, in the real world, small company management compounds these cash-raising issues by doing too little, too late…inevitably issuing shares at the worst possible price – of course, junior resource stock management are the unwitting masters of this tactic. [Whereas any large company CFO/Treasurer knows you raise money when it’s available…not when you actually need it!]

It’s touch & go whether we’ll see REAC back on the market again. The underlying asset value may still be there, but that may have little relevance in a distressed situation – at this point, bad deals & dilution often lock in permanent losses for existing shareholders. Farmer Business Developments plc is the big equity (& loan) investor here – REAC’s survival will probably depend on whether they’re ‘in for a penny, in for a pound…’

– US Oil & Gas (USOP:G4) has also been suspended – yet again! Go on, it must surely be time for my victory dance?! But that’s like winning an argument with a signing chimpanzee – in the end all you did was beat a monkey…

And I should admit my bearish USOP write-up at 620p was a desperately easy call to make. In fact, my only difficulty was focusing solely on the facts & figures (vainly hoping it might wake up/save a few suckers), because it was far more tempting to highlight USOP’s more qualitative aspects instead – i.e. how obviously crappy the company, its original backers, its ‘resources’, its management, its funding & its crazy investor base really were. Not to mention the strange homoerotic fixation many shareholders had/still have with wee Brian McDonnell, silver tongued devil that he is…

Even now some fruit loop will dare argue my ultimate 3.5p/worthless price target was never reached (um, because USOP got suspended again!?). But the more I think about it, the more beautiful this situation becomes…I mean, what’s better than savouring the hell of crushed & broken USOPian dreams? Yes, it’s front row seats to observe the purgatory of a suspension instead, where shareholders’ hopes & fantasies can still linger on quite improbably for months or even years to come. [And wives can justifiably be left in the dark about the true scale of savings lost forever]. Aaahhh, you really have to be cruel to be kind… 😉

OK, time we should focus on the living instead: Since I’ll surely comment on/revisit many of these companies (below) in due course, I’ll try keep the rest of this post short & sweet. Let’s highlight the most potentially over-valued & under-valued stocks right now, starting with the TGISVP Dozy Dozen:

No big surprises here, these are still stocks to avoid, to sell, or even to short: We have our usual selection of junior resource no-hopers, a couple of ridiculously over-valued bank stocks (even Baldy Noonan can’t seem to warn some people off the ‘eejit trade’), my long standing bete-noire Greencore Group (GNC:LN), and a couple of biotech/medical device stocks which appear wildly over-valued (and offer precious little data to argue otherwise).

Let’s cheer ourselves up instead with the TGISVP Fab Fifteen: 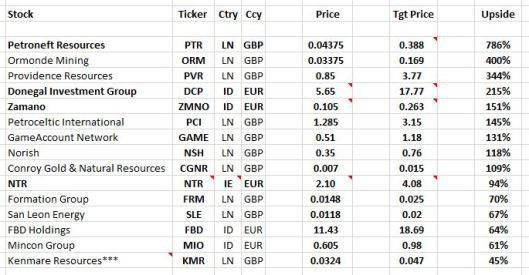 Rather amazing to see this table also jammed with junior resource stocks..! [Which must infuriate my muppet critics – they’d much prefer to believe I simply hate all juniors!] But many of them are so beaten down now, they potentially represent good value – however, that’s a call on underlying asset values, it doesn’t necessarily address their risk(s) of continued negative sentiment, incompetent management, negative cash flows, and/or required/urgent funding needs. After its abandonment by Dragon Oil (DGO:LN), the market valuation of Petroceltic International (PCI:LN) is now particularly intriguing. On the other hand, Kenmare Resources (KMR:LN) remains a dodgy prospect, despite the collapse of its over-valued share price & even with a potential bidder still lurking in the wings – a debt default and/or a major dilution are now looming risks for existing shareholders.

Then we have two busted IPOs – Mincon Group (MIO:ID), another casualty of declining commodity prices & sentiment, and GameAccount Network (GAME:LN)…which only has itself to blame. [GAME’s pre-IPO revenue/accounts (Jan-Oct 2013, as included in its prospectus) turned out to be extraordinarily misleading for investors when compared with subsequent revenues in Nov-Dec & H1-2014 (where revenue was down 54% yoy!?)].

FBD Holdings (FBD:ID) also feels a bit like a busted stock, at the moment – I believe its long-term investment thesis is still as attractive as ever (which should ultimately justify my original target price), but the recent collapse/disappearance of operating profitability was pretty unexpected & may continue to pressure the share price. Next we have Norish (NSH:LN) & Formation Group (FRM:LN) – both are cheap & potentially interesting micro-caps, though activism (or some other catalyst) may well be needed here to realise value.

Last, and certainly not least, I’m delighted to see four (bolded) stocks I own – Petroneft Resources (PTR:LN), Donegal Investment Group (DCP:ID), Zamano (ZMNO:ID) & NTR plc. In my opinion, their prospects, valuations & margins of safety all speak for themselves…they may even represent rewarding New Year’s ‘resolutions’ to consider for your own portfolio!?

And finally, let’s not forget my complete updated TGISVP file (as of 31-Dec-14) for your reference:

Any questions regarding individual stocks & valuations, please don’t hesitate to comment or email me. And I’ll be back shortly with a few posts taking a closer look at 2014 performance. Meanwhile…