OK, just in time, my performance analysis got a bit more sophisticated. It now includes dividends, and is calculated on a weighted average gain basis, so now the impact of larger & smaller portfolio stakes is recognized. I think I’ve tracked any increase/decrease in portfolio holdings pretty well during the year, via Twitter (so plse sign up as a follower!) & blog comments. [No point in having interested readers if I don’t post such relevant info on a timely basis]. This allowed me to calculate an average portfolio stake for each holding, which I think is the best metric to use.

I did, however, stick with my original yr-end 2011 or 2012 write-up prices as a cost base – I didn’t want to drive myself crazy calculating average net purchase prices! However, I know I’ve subsequently added to portfolio holdings at higher & lower prices, so I think that pretty much cancels itself out. It also means I’ve omitted partial profits harvested on certain holdings, so my total return may be marginally understated.

Overall, eyeballing my respective analyses, dividends & portfolio weightings have in total (on a pretty even split) added about 2-3% to my annual return. The pretty low contribution from dividends may surprise you, but don’t forget I’m none too enamoured with them… See here, here & here. As far as I’m concerned, if you’re impressed enough with a stock’s valuation & prospects to actually buy it, surely you’d prefer to see it compound its earnings?! Only a third of my holdings pay a dividend.

OK, we should let the figures do the talking now. Please note any holding marked thus** has been completely sold off. And if anybody thinks I’m moving the goalposts here (vs. previously measuring performance via a simple average gain, exc. dividends), I include a complete Excel analysis file below for your perusal. [It also includes each holding’s website link, for reference]: 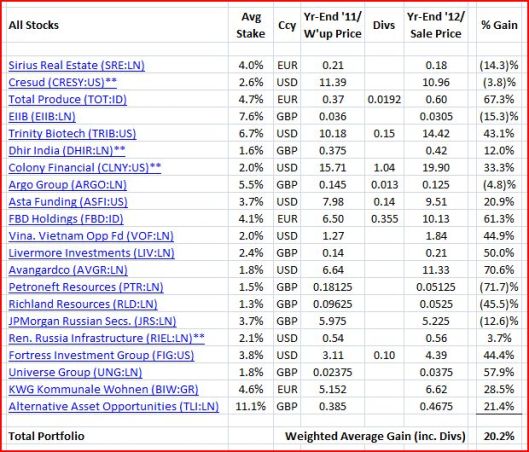 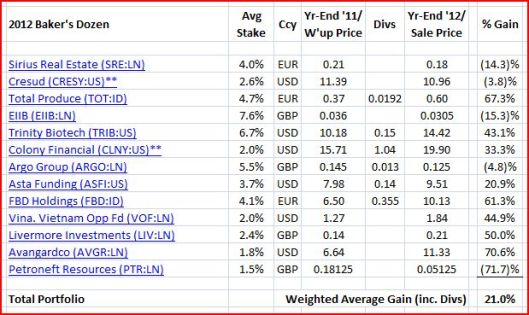 Looking at individual stocks, the winners really speak for themselves. There was no real game-changing/unexpected news involved (except for Avangardco at yr-end, which was completely ignored!), they simply made steady progress. In fact, considering the time-scale, most of the gains obviously arose from a (partial) closing of the valuation gap(s) I’d identified in my write-ups. Winning portfolio investment themes for the year were Irish & UK small/mid caps, alternative assets & frontier markets. It’s probably far more instructive to focus on my losers:

– Sirius Real Estate, EIIB & Argo Group:   Losses don’t appear to present any real cause for concern here, in my opinion. All enjoyed fairly neutral news-flow in 2012, and each possesses a significantly higher intrinsic value. In each instance, substantial upside can be realized by suitable management action, and/or (if necessary) by shareholder action…

– Petroneft Resources & Richland Resources:   At least I got my weightings right, these were my smallest portfolio holdings for the year. The real mistake was perhaps buying them in the first place! I still believe they offer far higher (measurable) intrinsic value, but it’s not clear that really matters… You can do all the value analysis you want, but investment success/failure’s probably going to be dictated solely by unpredictable news-flow, and the misfiring synapses of the resource stock tribe. This is really not investing, and it’s not fun money either…

– Cresud (& Richland Resources):   One can mostly ignore politics. But occasionally a tipping point is reached, and value goes out the window. Companies suffering from too much politics (or debt) always seem cheap, and then get cheaper! Fortunately, I recognized this with Argentina, and exited Cresud with only a small loss. I haven’t yet decided with Richland – in a somewhat similar fashion, Tanzanian government neglect has now evolved into more active interference. But in this case, perhaps offering the government some (bigger) slice of the pie might ultimately yield a significantly better net benefit for shareholders..?

– JPMorgan Russian Securities:   Country funds don’t lend themselves so well to value analysis. The best you can do is look for a cheap market P/E, and check the economic backdrop is neutral to positive. Focusing on fund discounts might actually be more rewarding – wide discount(s) may be the best signal a market’s cheap. My two Russia buys illustrate this – I actually turned a small profit on Renaissance Russia Infrastructure, vs. a 13% loss on JRS, mainly because I bought it on a far larger discount.

Timing/buying country funds is tough – after a purchase, the market invariably mocks you by promptly declining! The best solution is to average in to your stake over time. Most Russian funds (investing in listed stocks) trade around a 10-12% NAV discount in the past year, or so – ideally, I’d like to see a 20%+ discount, but Russia now trades on something like a 5.5 P/E, so beggars can’t be bloody choosers! I recently added to my JRS stake.

It’s difficult to identify how much luck’s involved, but overall I think I’ve done a much better job of avoiding/limiting mistakes in recent years. There are two simple reasons why: First, I’m far more disciplined about limiting the number & (more importantly) the size of speculative stocks in my portfolio. Second, I’m (usually!) no longer seduced by high debt & poor/negative cash-flow stocks. I really can’t stress this enough, I think this category of stocks is surely the biggest source of mistakes & losses for all investors.

If you’re a growth investor, the hype & potential that’s often attached to these kind of stocks may well suck you in. Equally, if you’re a value investor, the resulting cheapness of these stocks can also sucker you. Of course, what then happens is these stocks keep getting cheaper, or they go belly-up, or they survive but any eventual value/earnings benefit’s been diluted away… Steer clear! OK, let’s compare:

Of course, this is usually where I sigh, and wonder why I wasn’t fully invested for the year in just Irish stocks, and/or UK small-cap stocks (the FTSE Small Cap Index was up +24.9%). Thankfully, after a minute or two, I cop on & give myself a shake – that’s a rainbow I never really want to chase! But I think this highlights a number of problems investors tend to trip over:

– Home bias:   Perhaps the most dangerous… Yes, I’m a huge cheerleader for buying Irish stocks – but all in moderation, please! To end up voluntarily ‘trapped’ in your home market (no matter how large, US readers!) seems a bit like voting for a holiday in hell. Sure, you may end up the biggest fish & the best stock-picker, but you still run the risk of getting crucified for God knows how long. For example, if you were a fresh buyer of Irish stocks last year, I’m sure you felt v happy with the value & returns on offer! But spare a thought for the devoted Irish investor – a 17% return in 2012 doesn’t much offset the pain of enduring what is still a 67% loss from the market’s high…

First, you need proper context – for example, the 2012 UK small-cap rally isn’t so gratifying when you note it’s mostly a recovery from a 20% decline in H2 2011. Second, a new year should be pretty irrelevant. Why would you have new stock picks simply because it’s January? If you liked a stock in December, shouldn’t you still like it, or even think about buying more? And if you no longer liked a stock, shouldn’t you have sold it already?! Finally, a single year of performance means next to nothing – long-term performance is all that ultimately matters, for yourself & for anybody who wants to judge the merits of your performance.

– Chasing performance/lack of diversification:   Trying to home in on the best markets/sectors each year is just fool’s gold anyway. If you can do it, I salute you – you’re a far better investor than I, and I’m keen to come visit your private beach. But I just can’t do it – like most of us, I suspect. And if I tried, I’d probably fall into the usual trap of buying into the latest hype far too late. This kind of performance chasing & lack of diversification is almost guaranteed to yield inferior returns – even if you can match the longer term return of a more diversified portfolio, you’ll still suffer far more painful levels of volatility.

Now, I’m not suggesting you drearily fill your portfolio with benchmark weightings for everything – not at all! I think it’s entirely possible to assemble a diversified portfolio from a nice (but limited) selection of cheap and interesting assets & markets from around the world. This will allow you to sleep far easier, and I’m convinced it will deliver far better long-term returns in most instances.

– Relative performance:   In the end, relative performance is pretty meaningless. Let’s say everybody & the indices are down for the year, while you lose money but out-perform. Are you happy? Maybe in fund management la-la-land you are…but in the real world, of course you’re fucking not! And if everything comes up roses, is it relevant if you’re a little ahead/behind the indices? I say no! Your performance will mostly depend on how long & hard you worked (more so), how smart you were (less so), your attitude to risk & risk management, and (most importantly) how well you controlled your fear & greed. As long as you’re already pretty honest & self-critical in your investing, examining your performance against regular indices probably won’t be too rewarding or revealing.

Quite honestly, the only benchmark I feel has any true relevance (for me) is hedge fund performance. All genuine hedge funds (and there’s less & less of them, it seems) care about is absolute performance. If that means buying bonds, moving to cash, going short, abandoning your home market, buying unusual, uncorrelated or even negatively correlated assets, whatever – well, ideally, that’s exactly what they’ll do. I don’t have all the sophistication/tools a hedge fund might employ, but I think it’s absolutely correct to hold myself to the same high standard. After all, who am I really trying to impress here? Yes, in the end – it’s myself & my wallet.

I confess, it would actually be a great comfort to just stick with cozy & familiar sectors/markets/assets, but I know that seeking out absolute performance with a truly diversified portfolio is a far more demanding, but far superior, investment objective. Of course, diving into things you know nothing about is a far worse alternative – hence, the never-ending demand for more education & research. As I’ve said before, you need to always read, read, read!

But I have to admit, it’s also proved to be a really nice benchmark for comparison this year. 😉 Depending on which index you consult, it looks like hedge funds will wrap up the year with a +3% to a +8% gain. That’s pretty satisfying – my portfolio return was a multiple of their performance…and I don’t even get paid anything like 2 & 20! Best of luck in the New Year, readers!